I sometimes use the Pomodoro Technique when I’m having trouble getting started or focusing on something that I need to get done. I also use it when I’m focusing too much on one thing and not taking breaks as often as I should. I don’t have one of the cute little tomato timers – the original pomodoro. When I’m working in my home office I use a digital kitchen timer. It has a fairly loud alarm.

In my current job I work in a cubicle at the corporate office more than at home. Since I didn’t think my coworkers would appreciate the noise of a kitchen timer, I was using a reminder in Outlook. That just didn’t work as well. It occurred to me that perhaps there are kitchen timers for deaf people that flash a light instead of making noise. A search on Amazon turned up one that looked worth trying.

" for a while now and I can recommend it as a quiet alternative for cube dwellers. It can be noisy if you want. Not only does it have flashing lights – it has an alarm, and vibration. Each mode of alert can be switched on or off. It also has a magnet on the back so it sticks nicely on the whiteboard surface at the back of my desk. It sits just to the right of my monitor, in arm’s reach, and it flashes bright enough to catch my attention even when I’m deep into some code.

I turned on the TV while eating lunch. CNN ran a little Earth Day segment. A question was asked about things you can do at the office to save energy. One of the items mentioned was that you can save about seven dollars worth of energy a month by turning off a printer. Besides reminding me that it’s Earth Day (which I would have already known were I truly GreenTM), it made me think about a simple device I have been using to stop some of the power leaks caused by devices that are plugged in all the time (many of which are on even when they’re “off”). So for my Earth Day submission I give you the GE Handy Switch.

There may be similar switches made by a company other than General Electric. It just happens that the ones I have found locally are the Handy Switch made by GE. They come in both three prong (grounded) and two prong versions. As you can see from the pictures, I like to draw a “0” and a “1” with a marker to make it easy to see at arm’s length which position is off or on.

If a device such as a printer can use about seven dollars (that number comes from the CNN story, I’ve not confirmed it in any way) worth of electricity a month then, at around five dollars each, these switches can quickly pay back their cost in energy savings. If you’re curious about how much electricity your devices are actually using you can get a meter such as the Kill A Watt 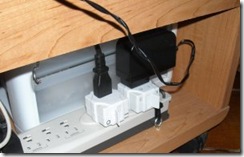 I keep buying more of these over time because they seem to actually be handy. They are available at Wal-Mart and others stores, at least here in the US. I assume there are similar devices suited to the local electrical connector specifications available in other countries. 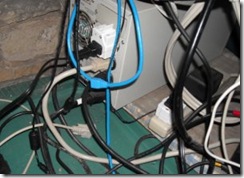 If we all do little things to save energy, like plug small electrical leaks, over time the savings will add up, in our individual electric bills and in the world’s energy use.

I picked up the iHome portable speaker for iPod (model iHM3B) at Wal-Mart for less than $20 a few months ago. I like it enough to mention it here in case someone else looking for a portable speaker for their mp3 player happens to stumble upon this blog. It is designed to work with an iPod but I don’t have an iPod (not that I don’t want one – I just don’t have one). Fortunately it has a 1/8 inch stereo jack so I can use it with my Sansa mp3 player (the Sansa was cheap and it works, but it’s not the subject here). The iHome takes four AAA batteries and comes with a set of alkaline batteries. I have been using rechargeable batteries and am pleased that it will play for hours on a charge even though rechargeable batteries tend to deliver less power than alkaline batteries. The iHome is also louder than I expected it to be. I can even listen to it while I’m in the shower (don’t take it in the shower – it’s not waterproof). Keep in mind I use it to listen to podcasts that are mostly talk, not much music. If you want jamming bass you’ll have to go bigger.

I suppose mine will mess up now that I’ve bragged about it. Well, at this point I feel I’ve got my money’s worth anyway. I’d buy another.